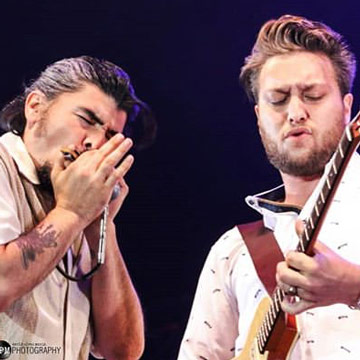 Will Jacobs is one of the main references of the new generation of Chicago blues. Since he was 14 years old, he was moving around the clubs of the windy city, first being invited on stage and then becoming a sideman of big names such as CJ Chenier, Carl Weathersby, Charly Love and a long etc., until he managed to lead his own band and become a usual performer in the city’s clubs and festivals.

In 2016 he moved his residence to Berlin, where he met Marcos Coll, harmonica player of Los Reyes del KO and who has played with music heavyweights such as Buddy Miles or Mick Taylor, as well as being a Hohner endorser.

Together they launch this project, which translates into a good number of performances throughout Europe and the recording of their first album as a duo in March 2019, released by the Gaztelupeko Hotsak label, where their own compositions prevail within the current sounds of Chicago blues.

On stage they will be accompanied by Julian Vaughn, drummer of Albert King, BB King, Rufus Thomas among many others, and Javier Vacas on bass (Corizonas, Los Coronas, etc.).